Some quadratic graphs are upwards, some downwards, some intersect with the x-axis, others not. What are the attributes of these graphs? How can we use them in graphing the function?

Attributes of a Quadratic Graph

Where A, B, C are coefficients of a quadratic function in the standard form:

Before we graph a quadratic, let us understand these attributes.

Coefficient A determines the shape of the quadratic graph and its orientation. It is upward or downward depending on the sign of the coefficient A.

A (=1) is positive, the graph is upwards. Vertex is the lowest point (minimum value).

A (=-1) is negative, the graph is downwards. Vertex is the highest point (maximum value). 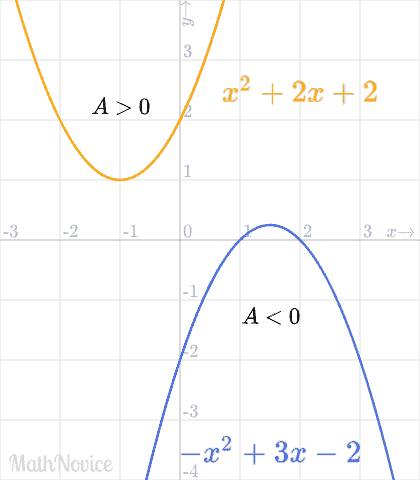 Vertex of a Quadratic Function

Vertex is the turning point in a graph. There is only one vertex in a quadratic graph. It is symmetric across the vertical line passing through the vertex. This line is its axis of symmetry.

The following holds for the vertex:

Find the vertex of a quadratic function y = x2 + 2x + 1. Using the formula above, you can calculate x and y values of the vertex as:

The axis of symmetry passes through x = -1 and is parallel to the y-axis. 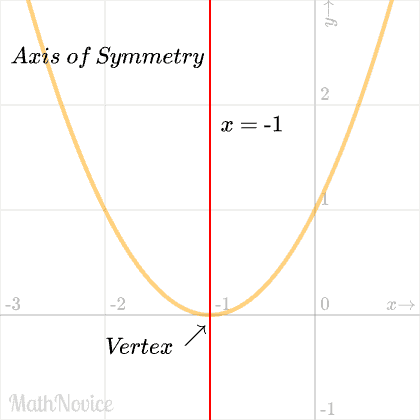 The y-intercept is a point where the graph hits the y-axis. The value of x is zero on the y-axis. So its y-coordinate is easy to calculate:

The graphs below show this shift using the following functions: 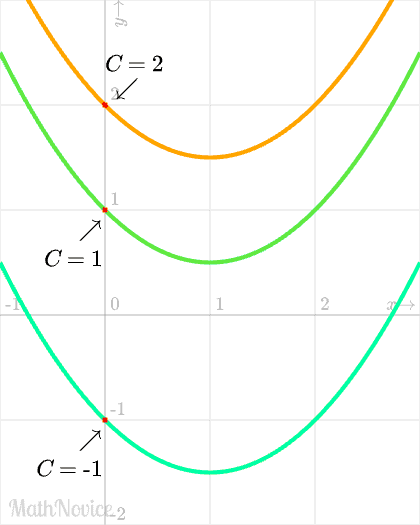 As C is the y-intercept, even the graphs of different quadratic functions with the same value of C will coincide on the y-axis.

The existence of roots depends on the sign of the discriminant D.

When the discriminant is negative, the graph will not touch the x-axis. There is no x-intercept. You can see this for the function below:

If the discriminant is zero, the graph will touch the x-axis at one point, so there is only one x-intercept. 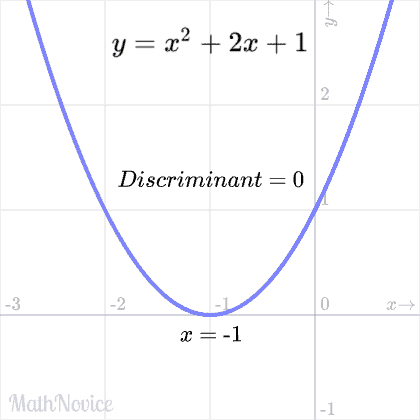 In the graph below, the corresponding function has a positive discriminant. The graph intersects the x-axis at two points. It has two x-intercepts. 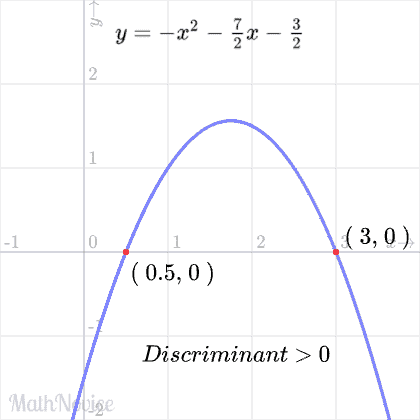 The width of a graph is a comparative feature. Between any two quadratic graphs, the one with a larger magnitude of A will be narrower.

The x2 term grows faster than all the other terms combined. Coefficient A has a multiplying effect on the growth of x2. Its impact depends on |A| (magnitude of A). So the function with the highest |A| grows ( or falls, for A < 0 ) fastest. Its graph is the narrowest.

For example, if we have the following two functions:

The graphs below correspond to the following functions:

|A| is highest for the function g(x). So its graph is the narrowest and grows fastest. The value of |A| for f(x) and h(x) are the same. Graphs of both the functions have the same width. 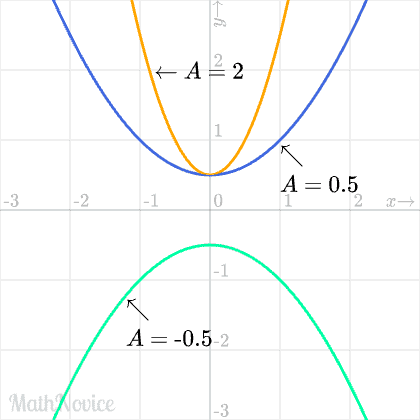 Using the above traits, we can quickly graph the quadratic function. We will use the following steps:

Let us see an example.

As coefficient A > 0, we have an upward graph.

Let us find the vertex using the formula:

Let us find the coordinates of the x-intercepts. We have to calculate the discriminant first:

As discriminant D > 0, there are two x-intercepts ( roots ). Using the following formula for roots of a quadratic function, we calculate the x-intercepts.

We calculate a few more points to make our graph accurate. We use the ones at an equal horizontal distance from the axis to reduce our effort by half. 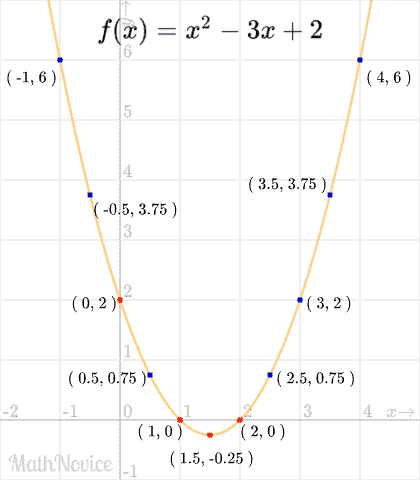